Congrats to the 39 runners who came out and braved the heat for The Bricker 8K on Sunday July 15th! Huge thanks to our volunteers too!! 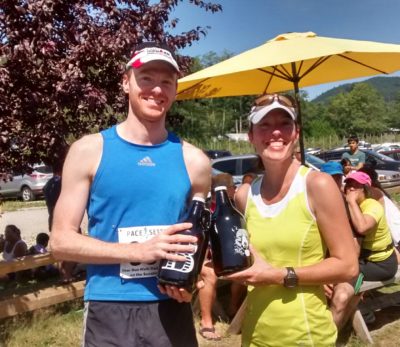 Winners of the Bricker 8k, James Montgomery and Donna Findlay

The distance was 8.4k and included 2km of trails. First overall and way ahead of the field was James Montgomery of Vancouver in 34:25, followed by John Jackson of West Vancouver in 37:39 and Keaton McIlwraith of Gibsons in 38:31.

Montgomery and Findlay were each rewarded with a growler from The Bricker for their efforts. Lots of draw prizes from PaceSetter and 2 more growlers from The Bricker were given away to lucky racers and volunteers.

The grand draw prize of a pair of Brooks shoes from PaceSetter was won by Benjamin Bauer of Sechelt, whose number was drawn among the 21 participants who completed 3 or 4 out of the 4 series events. A total of 13 runners did all 4 events.

Many participants stayed around after the finish to enjoy cider in the relaxed atmosphere at the venue, which features a grassy picnic area with tables and umbrellas. A bonus was The Manor Born food truck, a very welcome addition to The Bricker, serving a Racers’ Special scrambled egg dish with salmon and goat cheese, as well as pizza and desserts.