Under perfect conditions on the morning of July 1st, 36 mostly red-and-white-clad runners looped through the roads and trails of Upper Gibsons for the Canada Day 10.1K at The 101. The final 2km challenged everyone with a climb up the Mahan Trail. What goes down must come up…. 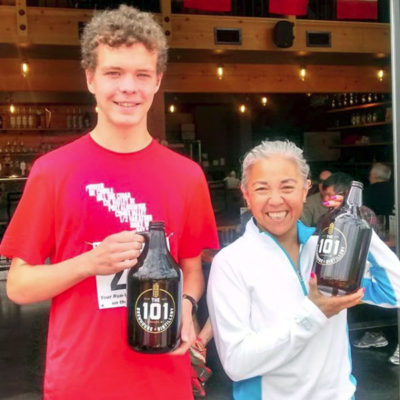 Will Rice and Ginny Blattler, winners

Leading the way were junior runner Will Rice of Powell River (43:35) and masters runner Ginny Blattler of Gibsons (50:46), who were each presented with a growler from The 101 Brewhouse + Distillery. (Will, who is only 16, gave his prize to his father, who also raced — we hope he received something in return!)

Rounding out the top 3 were Rian Mizzi of Gibsons in 44:27 and John Jackson of West Vancouver in 44:44 (age 65!); on the women’s side we had Katrina Walters of Halfmoon Bay in 53:01 and Parm Mann of Gibsons in 53:40 taking second and third, respectively.

Participants enjoyed post-race libations at The 101 and draw prizes from PaceSetter Athletic, with an additional free beer awarded to Rinette Lagace for finishing within seconds of 1:01.

The Series continues this Sunday July 8th with the Gibsons Tapworks 5K. That will be a flatter course!