The Gibsons Tapworks 5K saw a big jump in participation numbers over the first two events, with 50 finishers compared to 36; the series seems to be catching on! 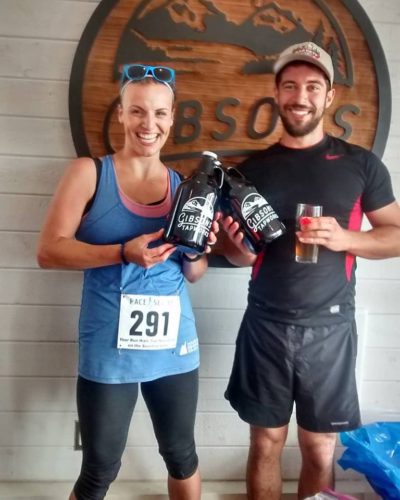 Fastest on the out-and-back-plus-loop course in Gibsons Landing were Rian Mizzi from Burlington (Ontario) in 19:58, and Chantelle Abma of Edmonton (Alberta) in 25:35. Rian finished second in the Canada Day 10.1K at The 101 last weekend; this was his first time winning a race outright. Both winners were rewarded with growlers from Tapworks.

Rounding out the top three on the men’s side were Elliot Wadge in 20:27 and Darren Causon in 20:56, both from Sechelt. The women’s runners-up were Kyra McRae of Gibsons in 25:59 and Susan Blair of Sechelt in 26:18.

The youngest finisher was 9 year old Elliott McCauley of Gibsons, who literally left some adults in the dust while sprinting for home to an impressive 27:49, good for 21st overall.

Participants and organizers enjoyed the newly upgraded and beautifully landscaped Armours Beach Park for the start/finish area, with new picnic tables, flat grassy tiers, and easy access from Marine Drive. At least one racer took a cooling dip in the ocean right after finishing.

After consuming the traditional post-race watermelon and cookies, everyone headed back up to Tapworks to redeem their complimentary drink tickets, exchange race stories, and participate in the prize draw from PaceSetter.

Next and final event in the series is next Sunday, July 15 in West Sechelt, the Bricker 8k (actually 8.4k) at the Bricker Cidery on Norwest Bay Road. Start time 10am. Register online and save! Series t-shirts are still available for purchase, $18 each at PaceSetter and at the races.