We were expecting a modest turnout for the 11th annual Four Lakes 10k & 3k at Katherine Lake Park on Sunday August 12th. But a slew of race morning sign-ups, mostly 3k family entries from the on-site campground, nearly doubled the registration count.

By the time the race was about to start, 39 runners toed the line for the 10k while another 26 were ready for the 3k Family Fun Run & Walk.

The cool, cloudy morning allowed runners to really push the pace after weeks of subdued training in blasting heat. A sprinkle of overnight rain was just enough to keep the dust down and wash off the surrounding foliage. 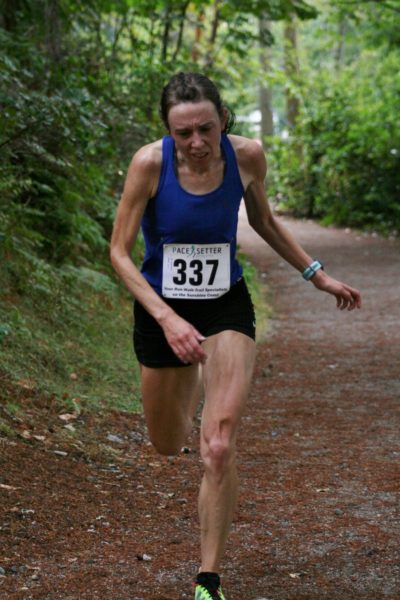 Fastest over the scenic 10k course was Vancouver’s Emilie Plante in the Open 20-39 category, leaving all the men and other women behind to cross the line in 42:58. Half a minute behind her was the first male, Rick Roberts from Earls Cove, in the 50-59 age division. Just 20 seconds later, Sechelt’s Jamie Leveque crossed the line in 43:50 to win the M40-49 age group and set a new personal best.

Second woman overall was Surrey’s Colleen Shulze, who picked up the pace in the second half to end up in 7th place overall and first in the F40-49 category. Halfmoon Bay’s Yoshimi Martin edged out Vancouver’s Leanne Karnehm by 5 seconds for third female honours, winning the F50-59 division in the process.

Of note, Shulze’s son Landon outran his mum by nearly 2 minutes to finish 6th overall in 47:09, an outstanding result for an 11-year-old!

The rest of the Schulze family (kids Sophia and Houston, followed by dad Kevin) continued their winning ways, being the fastest to complete the 3k Family Fun Run & Walk, a full five minutes ahead of everyone else. No awards are presented in the 3k so times and order of finish are just for bragging rights.

Full results and many photos can be found at pacesetterathletic.club/4lakes/.

Next event hosted by PaceSetter Athletic is the start of the 2018 5 Dollar 5K Series, at 10am on Sunday August 19, part of the store’s 2-year anniversary weekend celebration. Race day sign up will start at 9am at PaceSetter.