A large group of PaceSetter club and clinic members attended the 48th annual James Cunningham Seawall Race, held Sunday October 28th, 2018. This fun, well-organized race goes around the seawall for 9.5km, and sees many participants in costumes due to its proximity to Halloween.

Our costumes were very simple, just some dollar store devils horns headbands that we could all wear comfortably. They made it very easy to spot each other in the crowds.

It rained overnight and intermittently during the morning before the 10am start time, but stopped for the race. Patches of clear sky started to appear, and the sun was shining by the time we were finished. Nice!

Jamie Leveque got off to a fast start, and it wasn’t until about 5k near Lumberman’s Arch that Teresa Nightingale was able to catch up, after following those red horns halfway around the seawall. They finished just 22 seconds apart, in the top 45 overall out of 402 finishers.

Teresa was 7th overall female and first in the F50-54 category, while Jamie nabbed 5th spot out of 25 in the M45-49 division. A few minutes later Mathew Wilson was the 6th male in the 40-44 age group to cross the finish line. 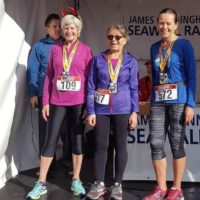 Next it was Kelly Jung and Trudy Baba separated by 10 seconds, with Kelly 6th in F55-59 and Trudy winning the F65-69 category by only 2 seconds!

Charlotte Goldenberg and Meghan Spithoff both ran strongly to finish well under an hour, in the top 50% of their respective divisions; while Tracy Forster was happily surprised with her finish time, battling a Halloween party hangover and minimal training of late.

Mary Kenny joined our group for the day after spotting us on the ferry. She was the final finisher in her age group but ahead of 20 people overall.

As a nice bonus, three of us also won draw prizes!